KATIE CLEARY’S DOCUMENTARY “GIVE ME SHELTER” TO PREMIER FEBRUARY 24TH 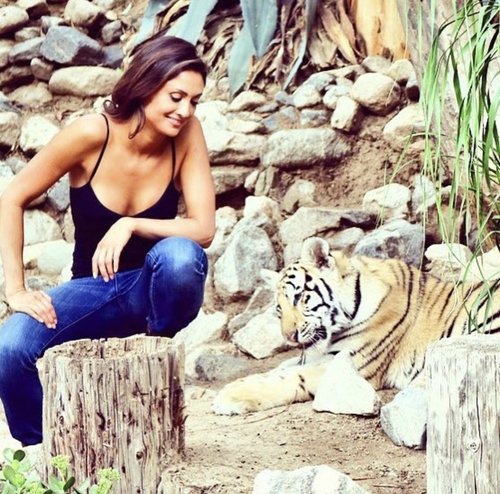 Tomorrow on February 24, 2015, the award-winning documentary, “Give Me Shelter”, will premier in West Hollywood. This documentary is destined to become one of the all-time great films to educate everyone on the horrors endured by animals around the globe, and the critical need for positive changes to be made for them. This documentary covers a huge spectrum of international animal issues including puppy mills, horse slaughter, the fur trade, the ivory trade, tiger conservation, the exotic animal trade, endangerment of orangutans due to the palm oil industry, as well as the issues concerning dolphins and whales for slaughter, and for use in human entertainment. It was written by model, actress, and passionate animal advocate, Katie Cleary, who was also the executive producer for the film, and was directed by Kristin Rizzo. The trailer for the documentary can be seen at the link in this article.

Katie Cleary is well known for her work in modeling as well as her work as an actress. Ms. Cleary founded Peace4Animals, a non-profit organization that works to help animals around the world, usually having a primary focus on one particular animal issue each year. She often partners Peace4Animals with other large animal organizations, in order to have as much reach as possible to help the animals in need. These have included animals of all kinds such as tigers, and also the orangutans who are being driven to extinction by the palm oil industry. It would take an entire page to list all of this amazing young woman’s accomplishments in her short lifetime, with her passion being directed and saving animals.

Once achieving celebrity status, Ms. Cleary did not stop and rest on her laurels, but instead, she made the decision to make this documentary. I had the honor of having a telephone interview with her on February 19th, and in our conversation, I asked her when she decided to make this documentary, and why. She told me that in 2012 she woke up one morning and had an epiphany. She said animals have always been her angels, and a huge and important part of her entire life. She realized that with her celebrity status, she now had the contacts and ability to really make a difference for animals everywhere and to give back for them by using whatever talents she could gather together. The idea for “Give Me Shelter” was born.

She began to reach out to other big names that she knew, asking for their help. Actress Tippi Hedren, whom Ms. Cleary called the “matriarch of animal advocacy”, came on board. She also contacted Ric O’Barry, founder of The Dolphin Project and who had produced the documentary, “The Cove”. Mr. O’Barry works tirelessly to help stop the slaughter of dolphins and whales, specifically in Taiji and the Faroe Islands, and to stop the capture of these magnificent creatures for use in amusement parks for the entertainment of humans. Ms. Cleary said she knew how busy Mr. O’Barry was, and did not think he would be able to help due to time constraints. However, to her joyous surprise, he jumped on a plane and came immediately to help. Also involved were Robert Davi, Carole Davis, Andrea C. Kelley, Esai Morales, Kristen Renton, Michael Vartan, Alison Eastwood, Elaine Hendrix, Carly Lyn, Charlotte Ross, and Jill Wagner. Every person involved in the making of this documentary is deeply involved in animal advocacy, and all of them played a huge part in making it the success with critics that it already is, with the awards it has won so far, and the success it is destined to become, once the general public gets to see it when it debuts on the 24th of February.

After being inspired to do this, Ms. Cleary began the labor of love to get it done. Over the ensuing three years, there were 177 hours of footage shot for the film. This was finally edited down to 1-1/2 hours, to include as much detail as possible about all of the issues. Interviews were held with advocates who have dedicated their lives to helping animals, each speaking about their individual passions and the needs of the animals they work to help. It is shocking to realize how little the general public knows about the harsh realities animals face every day. These are creatures we were meant to share this earth with; not to exploit for our own enjoyment. Yet, every hour of every day, animals around the globe are suffering at the hands of greedy monsters.

I next had the additional honor of speaking with one of the stars from the documentary, Alison Eastwood. She is also known, not only for being the daughter of iconic film star, Clint Eastwood, but on her own for her modeling and acting career. Ms. Eastwood was the host of the Nat Geo Wild television series, “Animal Intervention”. She also founded the Eastwood Ranch Foundation, which is devoted to helping with animals of all kinds, as well as spay and neutering programs, and adopting out as many homeless animals as possible. In the documentary, she is interviewed and speaks about a myriad of topics related to animal issues that involve her own personal passions.

Ms. Eastwood echoed the selfless and devoted sentiments of Ms. Cleary. She stated that with the achievement of celebrity status there also comes a huge responsibility. Within that responsibility, her belief is that those people with big hearts and conscious minds need to become a force for good; to raise awareness and educate others about the needs of these animals who depend on us so much, sometimes for their very lives. Her hope is that this documentary will help to create new possibilities for further changes for the better. If even just a few people’s minds are changed and eyes are opened to the issues, then the ripple effect can be huge, and positive changes will definitely come from it.

This documentary will enlighten the public to so many of the horrors the precious animals are facing. Every day across the United States, over 10,000 unwanted and thrown-away dogs and cats are killed in shelters. Thousands upon thousands of fur-bearing animals are killed in horrific ways just for their skin, so some human can adorn themselves with the fur and somehow believe it makes them look beautiful. Horses of all ages and sizes, most of them completely healthy, are loaded into cramped transport trucks and driven hundreds of miles without food, drink, or rest to Mexico or Canada, where they are then slaughtered for their meat. Already-endangered orangutans are being driven to extinction because of the greed involved in the business of palm oil, which is not only taking their habitat, but also wiping out the rain forest upon which our very earth depends. Elephants are killed, many right inside of nature preserves, so their tusks can be taken and sold into the black market ivory trade. Dolphins and whales are driven into coves, where a handful are selected to be sold to amusement parks for human “entertainment”, and the rest are brutally slaughtered for their meat. Entire family pods are wiped out, as they fight hopelessly to save themselves and their young. Wild exotic animals are stolen from their homes and sold into slavery; either to be kept as “pets”, to be used in roadside petting zoos or displays, used in “canned hunting” farms, or into circuses, where they receive cruel treatment at the hands of humans to “train” them.

These issues mentioned above are just a few examples of those being faced by animals around the globe today, and which are covered in this comprehensive documentary. These animals are at the mercy of monsters disguised humans, and it is all done in the name of money and greed. There is no valid need for palm oil, animal fur, ivory tusks from endangered elephants, horns from the critically-endangered rhinoceros, pet store sales of dogs or cats from puppy/kitten mills, exotic animals to keep as pets or in circuses, or ocean mammals to “entertain” us in amusement parks. These animals should be allowed to live their lives as nature intended, and not have to endure the agonies of these terrible lives and even more terrible deaths.

Ms. Cleary’s documentary, along with all of the big names who so willingly participated is a testament to the dedication of so many advocates around the world who are working for positive changes for the animals of this earth. In addition to that, Ms. Cleary wanted to show young women everywhere that they can use their talents to do whatever they desire. Her statement to me was, “You have to go after your dreams”. Ms. Cleary dreamed of making a difference for animals, and her dream is coming to fruition with this documentary, along with her organization, Peace4Animals, and all the hard work she has done and continues to do every day for animals everywhere. She is an inspiration, both to young women as well as young men, to follow their dreams and never think for a moment that they cannot succeed; because they can.

This documentary is truly something every advocate should see. It will almost certainly become a benchmark for future generations to watch and to learn from. As Ms. Cleary and Ms. Eastwood both stated to me, we must continue to pass the torch of advocacy down to the next generations, so they can continue to move forward and bring about the positive changes so desperately needed by the animals of this world. I urge everyone who cares about animals to get this film, watch it, share it, and tell others about it.

The animals have a greater need than ever for advocates to do whatever they can to help them, and this documentary is the proof on film of just how dire the need is. Now it is up to every advocate to share this, and educate as many others as possible, so that ripple effect begins and the tidal wave of positive change is created.