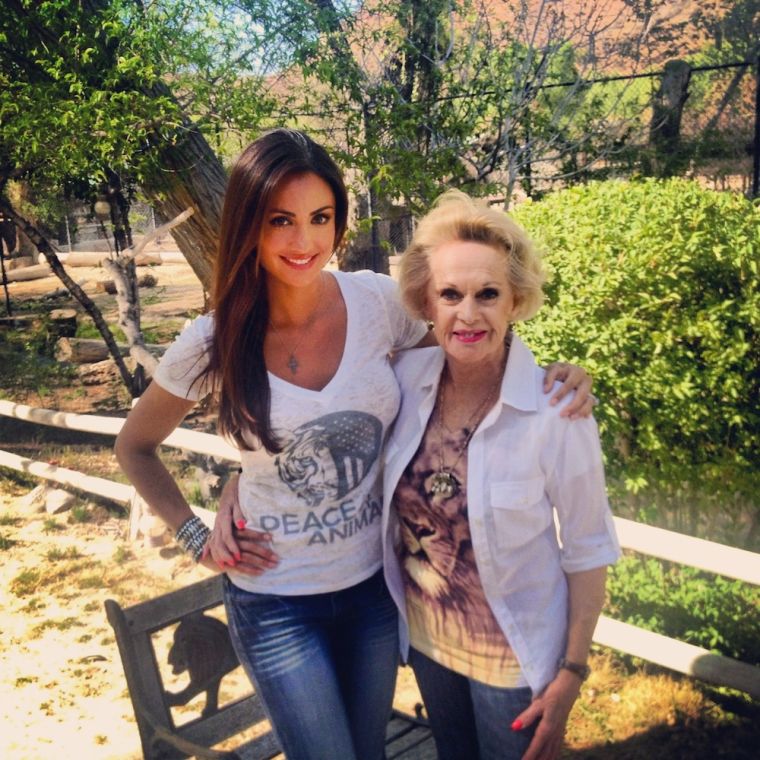 Filmmaker, model and actress Katie Cleary would trade all the glam in a minute if it would save the 2,000 Bengal tigers still roaming free. Or ban puppy mills. Or fund animal shelters. Or eliminate palm oil as a food ingredient, since Indonesian orangutan populations are destroyed to harvest it.

The animal rights activist is working for them all, from as many platforms as she can find. She recently won Best Documentary Short for her film “Give Me Shelter” at the Los Angeles Cinema Festival of Hollywood. The short film serves as a trailer for the feature film she is currently editing, a far-ranging work documenting the most pressing issues of human cruelty against animals around the world, and suggests ways to combat the aggression perpetrated on the voiceless.

“I’ve been rescuing animals since I was 10 years old,” Cleary said. “Once you start realizing the millions of ways animals are abused everywhere around us, you can be overwhelmed. But I think the answer is in raising awareness, one voice at a time.”

Cleary, a Calabasas resident who has appeared on TV shows such as “Chuck” and “America’s Next Top Model,” began to join forces with some of the more visible animal rights proponents, like veteran actresses Betty White and Tippi Hedren. She created petitions and successfully worked with local activists to pass ordinances banning puppy mill sales of animals in L.A., Hollywood and Glendale.

But there is so much more to be done, Cleary says. Citizens can take a first step by purchasing 100 percent recycled or certified sustainable paper products. Much of the world’s new paper supplies come from rainforest deforestation, which has brought many animal species to the brink of extinction. Refusing to support wildlife entertainment like circuses or dolphin “encounters” would make a difference, she said. Such animals are ripped from their families and environments, and made to “perform” for the rest of their lives.

Most importantly, she says, think of adopting an animal from a shelter. Up to nine million dogs and cats are euthanized every year because they cannot find homes. Cleary has plenty of support in her efforts to change the animal zeitgeist locally. She was joined in film production for “Give Me Shelter” by Topanga resident Alison Eastwood, daughter of the accomplished filmmaker Clint Eastwood, and an actress/director in her own right. She recently completed a run on National Geographic’s channel of her series “Animal Intervention” to raise awareness of the plight of animals worldwide.

“I came on board after Katie started working on ‘Give Me Shelter’ and we really clicked,” Eastwood said. “We decided to combine our love for animals and our activism into education, and film or TV is the most immediate way to reach people.”

Eastwood and Cleary are collaborating on ideas for educational Internet content as well. “Putting difficult content, like what happens in puppy mills, is hard for network TV, so there’s more opportunity with an internet approach,” Eastwood said.

“There’s worldwide traction online. I want to think globally, but we need to clean up our own laws on animal welfare. If we do that, we can set examples for countries like China and Korea.”

Meanwhile, Cleary hopes to reach large audiences with her documentary. She also thinks that flogging the petition approach will make a difference.

“If you send a petition with 200 signatures to Trader Joe’s or Ralph’s, demanding they discontinue products with palm oil, they’ll listen,” Cleary said. “That’s your local community speaking out. I don’t want my children to grow up in a world where the last tiger died out on my watch. One person with one voice can make a change.”