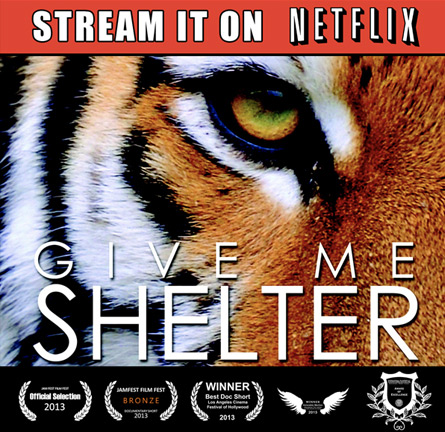 Dr. Jordan Schaul reviews the ground-breaking, award-winning documentary Give Me Shelter produced by model/actress Katie Cleary of Peace 4 Animals and Director Kristin Rizzo. The film explores the lives of animals in a society that continues, despite progress, to abuse and neglect them.

I admit that I’ve worked in pet stores, zoos and sanctuaries, in university laboratories and on horse ranches and cattle stations among other live animal facilities. I thought I knew most every perspective and every truth and falsehood about these industries. But this film caught me off-guard. And it should catch you off-guard.

Give Me Shelter uncovers a side of the human-pet industry interface that is unscrupulous and largely unknown to the human consumer and companion pet owner. It reveals the inhumane treatment of domestic and wild animals as they are commercialized and exploited for food, clothing, medicinals and other uses.

The documentary speaks to a selfish species and a selfish instinct. It speaks to us as humans.

Give Me Shelter conveys just how we continue to dominate rather than just coexist. It is poignant and powerful reminder of what we have done and continue to do to the voiceless. The film is engaging and unprecedented. And it is as enlightening as it is disturbing.

Give Me Shelter captures a sad reality through interviews with noted celebrity animal activists and professional advocates. It conveys something about our own sentience or lack thereof and our disregard for many members of the animal kingdom. Despite how progressive we may perceive our society to be, this documentary clearly establishes how far we need to go.

The film takes us on a journey of young dogs and cats from commercial puppy mills and catteries to retail pet stores around the nation. It reveals the horrific nature of the horse slaughter industry and the brutal last days of companion equids.

The film also exposes the brutality on fur farms and factory food animal farms. It explores the lives of performing animals. Give Me Shelter exposes the dangerous and irresponsible trade in exotic animals here in the US. It broaches the subject of conservation and the plight of threatened and endangered species around the world. It is a must see.